Coverage of the IG3IS/UNFCCC Side Event at COP 24 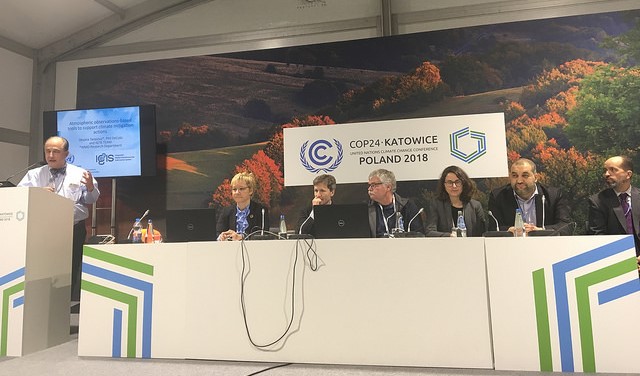 This Tuesday at the United Nations Framework Convention on Climate Change (UNFCCC) 24th Conference of the Parties (COP 24), IG3IS and UNFCCC hosted a joint side event entitled “Innovative atmospheric observation-based tools to support climate mitigation action." This event introduced the COP community to the benefits that IG3IS provides national, urban, and private stakeholders through top down assessment of mitigation action, and used specific, past, IG3IS pilot projects to demonstrate those capabilities.

This Tuesday at the United Nations Framework Convention on Climate Change (UNFCCC) 24th Conference of the Parties (COP 24), IG3IS and UNFCCC hosted a joint side event entitled “Innovative atmospheric observation-based tools to support climate mitigation action." This event intended to introduce the COP community to the benefits that IG3IS provides national, urban, and private stakeholders through top down assessment of mitigation action. Such methodologies that can be added to currently available bottom up methodologies in order to reduce uncertainty associated with greenhouse gas emission information.

Phil DeCola, Chair of the IG3IS Science Team, began the event by underlining the importance of the information that the atmosphere has provided, can provide, and currently provides through the IG3IS Science Team. Building on this, Dr. Oksana Tarasova, Chief of the Global Atmosphere Watch Programme (GAW) - the program within which IG3IS resides -, relayed the need she has found across the globe for IG3IS services. She asks, “While the Paris Agreement is a giant leap towards addressing the climate challenge, how will it be implemented? Countries can make these commitments in compiling the NDCs, but what do they use to ensure that their national inventories are complete and accurate?” Then, she underscored the needs of regional climate mitigators such as cities and enterprises. These are entities, she argues, that are highly motivated to initiate policy, but do not know what greenhouse gases (GHGs) are the most prevalent within their boundaries, or, which GHGs would be the quickest, cheapest, and most impactful to reduce. Furthermore, even if they have the information to make an initial policy, they do not have the information to monitor and verify its success.

This is where, Dr. Tarasova declares, IG3IS can serve the community. Not only is it a science-based approach that uses consistent methods across users and continues to improve by accommodating and inter-comparing new technology and information, but, it is also user-driven. Those whom IG3IS seeks to serve are involved in the project development from the beginning. They are requesting the type of information they need, then IG3IS helps to formulate a solution. Tarasova went on to briefly discuss some of the success stories of IG3IS such as its national project in Switzerland and megacity projects in Paris and Los Angeles, but wanted to pass the microphone to the other panelists, so they could describe the success of their IG3IS projects in more detail.

The success stories relayed by the panelists included the following results from across the globe:

Additionally, some panelists outlined plans for a future, comprehensive, urban intervention in Paris. The specialty of this project is that it would not only provide atmospheric measurements to city leaders, but also to its citizens, so as to enable their participation in the mitigation transformation. The project would entail: the establishment of sensors throughout the city, whose data, when combined with inverse modelling, could create an index of GHG emissions for citizens and decision-makers to monitor their impact; a mapping service that could target carbon reduction projects; and, the financial support to allow for the creation of carbon credits that would be presented to Paris’ citizens. With the success of this three-tier design, project leaders believe that Paris could serve as a pilot for other cities whose scalability could progress IG3IS goals at the urban scale worldwide.

After the panelist presentations, the floor was opened for attendees to ask questions of IG3IS capabilities. This opportunity initiated valuable discussions on: the possibility of IG3IS projects in various audience members’ regions; the data quantity and quality required to achieve project results as mentioned above’ the possibility of IG3IS services used to progress carbon markets; etc. Overall, the side event laid the foundation for valuable and collaborative discussions about possible future IG3IS projects serving communities across the globe. The team is excited to see how these conversations develop throughout the rest of the COP 24 conference, and thereafter.

This piece was written based on event coverage provided by two University of Michigan delegates to COP 24: Emily Yang and Tim Arvan