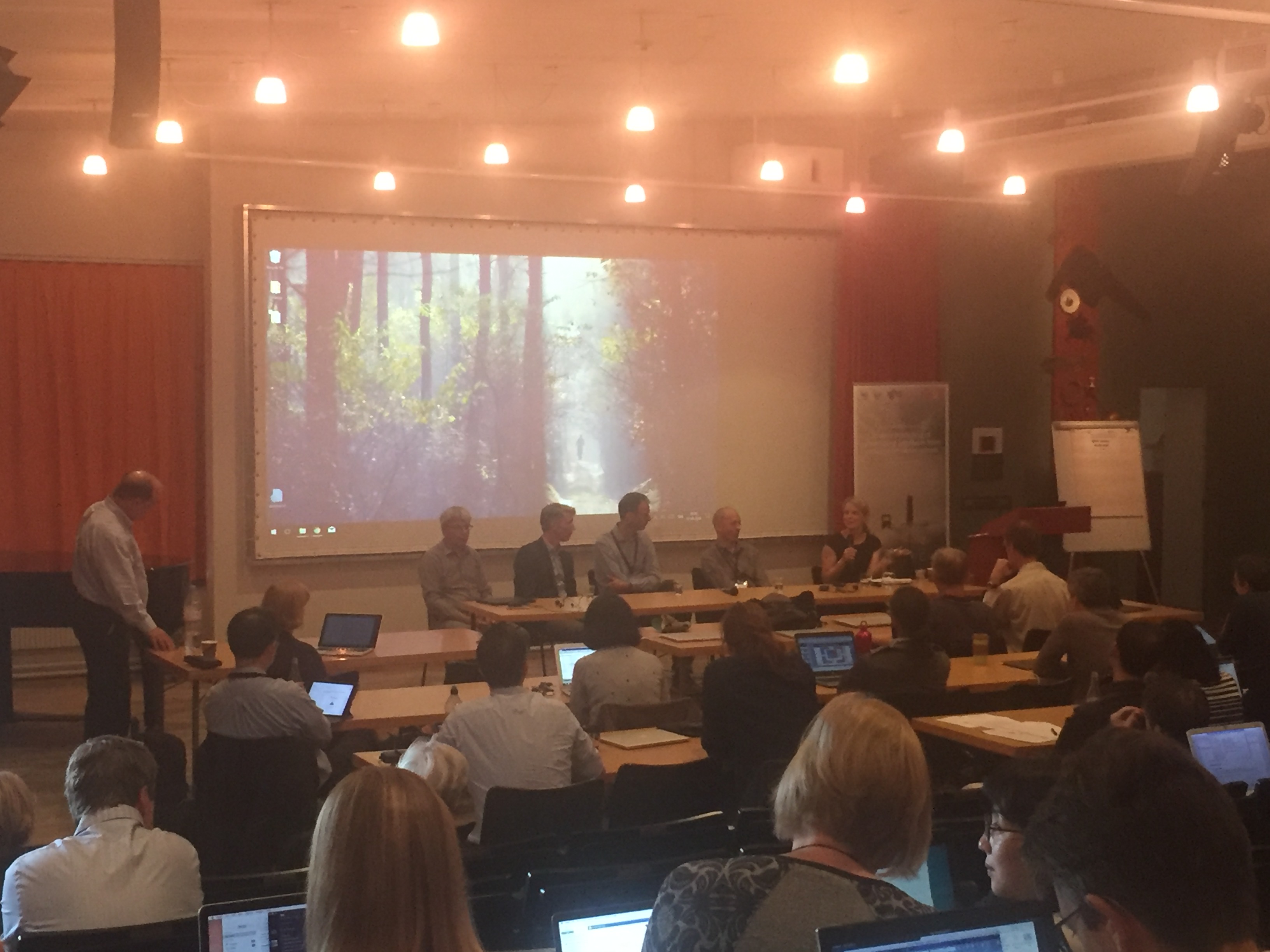 This week, at the IG3IS/TransCom Inverse Modelling of Greenhouse Gas Fluxes from Atmosphere Observations Workshop, the two communities are coming together to not only update each other on recent advancements of technologies and methods in the inverse modeling field, but also, to discuss how these techniques can be successfully applied to and used by stakeholder communities. Following two days of presentations, IG3IS and TransCom sought to begin these important conversations through a panel discussion entitled, "Science to Services Partnership."

This week, at the IG3IS/TransCom Inverse Modelling of Greenhouse Gas Fluxes from Atmosphere Observations Workshop, the two communities are coming together to not only update each other on recent advancements of technologies and methods in the inverse modeling field, but also, to discuss how these techniques can be successfully applied to and used by stakeholder communities. Following two days of presentations, IG3IS and TransCom sought to begin these important conversations through a panel discussion entitled Science to Services Partnership.

The discussion began with brief presentations from each panel member in which they highlighted both how the atmospheric measurement and inverse modeling community has begun to collaborate with stakeholders, and what they believe is most important to consider when progressing with this movement. Dr. Maksyutov began by highlighting the progress that has been made regarding the IPCC inventory guidelines and their incorporation of atmospheric inversions. When reviewing the 2006 IPCC inventory guidelines, Maksyutov said that it does make the mention for the potential of using atmospheric observations and inverse modeling, even citing work by some researchers present at the workshop including Dr. Alex Vermeulen's work in 1999 on the Netherland’s methane emissions and Dr. Alistair Manning’s work from 2003 on the United Kingdom’s emissions. However, this language in the 2006 guidelines was overall cautious. As the discussions have commenced on the 2019 refinements to the IPCC inventory guidelines, Maksyutov believes that recent developments in the national inventory reports by the United Kingdom, Switzerland, and Australia, which used atmospheric inversions, has increased confidence in these methods and thus provide a better base for introducing this approach as practically possible in 2019 refinements.

With an understanding of the current opinion of international and national stakeholders provided by Dr. Maksyutov, the other panelists focused on how to increase stakeholder engagement on the subnational scale. Dr. Gurney discussed the community’s current focus on verification. While he believes that verification of fluxes should continue to be a priority, providing guidance on where the greatest mitigation opportunities are should be of higher near-term importance. He contended, “We are generating a lot of valuable information, but we are almost hiding it from the public, or least, not making it as easy to understand.” Dr. Lauvaux supported Gurney’s assertions when he stated, “We have plenty of papers, plenty of numbers without needing to run another inversion. I think the challenge for this IG3IS community is to stop trying to convince each other that we have the correct numbers, and instead, convince people outside of this community that our numbers are useful.” Dr. Mueller built from Lauvaux’s thought by advocating that the community not only needs to prove to outside stakeholders that the numbers it has generated are useful, but rather, the community needs to make sure that the numbers it generates are usable by the stakeholders. Mueller acknowledged how in the past, stakeholders were not as interested in these findings, but, by citing recent stakeholder engagements in city governments like Boston and Salt Lake City, state legislatures like California, and industry such as natural gas distributors, she argues that these opinions have shifted. Lastly, Dr. DeCola supported Mueller’s position recalling his previous work for the U.S. National Aeronautics and Space Administration (NASA). He mentioned, “When we provided our data in order to assist resource management sectors, it actually helped us to improve our science, because we were able to see what things we could and could not do.”

After these introductory presentations, the discussion session began with a comment regarding how to introduce stakeholders to our capabilities and build trust. Dr. Jocelyn Turnbull, of GNS Science in New Zealand, suggested, “We should figure out techniques which are easier to do upfront, so they can serve as an initial demonstration case for stakeholders.” Dr. Ray Weiss, of the University of California San Diego, answered by stating he believes this demonstration case has already been found in the form of halocarbons seeing as they are such potent greenhouse gases and are arguably easier to mitigate. Dr. DeCola supported this idea referring to the potential for future work in developing countries. He argued that refrigeration is very important for comfort and health, and as developing nations begin to utilize more refrigeration, halocarbons could serve as a good “gateway drug” to the benefits of atmospheric inversions in those regions too.

Discussion continued with other ideas for increasing understanding and building trust with stakeholders. These included thinking about general network design for subnational projects, and trying to gear these designs towards trend measuring, as trends are more easily understood by stakeholders. Then, discussion steered towards reconciling different greenhouse gas emission measuring communities, namely the top-down measurements coming from atmospheric inversions and the bottom-up measurements associated with inventory building. Dr. Mueller asserted, “We have this issue of separating top-down and bottom-up. I think we need to dissolve the idea that these are separate entities that we need to compare, rather, they are entities we should combine.” Dr. Gurney backed Mueller’s argument by declaring, “Political reasoning has separated the two measurement communities, but we should end that practice and instead combine our techniques with their information. There is one set of fluxes in the world, and it should be our set.”

Before the discussion came to a close, Dr. Houweling left the community with a thought for attendees to mull over as the IG3IS/TransCom workshop progressed the rest of the week. He stated, “Our community is working on very different methods and techniques in various regions of the world, and you may not think automatically that what you are doing applies to the IG3IS initiative. However, I challenge you to think through the aspects of your work, and see if there is some way you can apply it.” Dr. DeCola seconded this statement by saying, “We as scientists might not think that our work is directly useful to stakeholders, but many of them will find that it is because it is better than what they currently have access to.”

More discussions of this nature will happen this week as the workshop progresses, stay tuned.